Alexandra Mezher, 22, died at a migrant centre in Sweden

Alexandra Mezher, 22, was working on a night shift alone at the home for unaccompanied young refugees in Mölndal, near Gothenburg when she was attacked .Staff for the next day were due to take over 30 minutes after the attack on Monday morning.Chiméne Mezher, 42, today told how she had lost her ‘angel’ daughter, as a cousin said: ‘It is the Swedish politicians’ fault that she is dead.’Police have recently been calling out for more support as they struggle to deal with the wave of migrants arriving in Sweden. Police in Stockholm said the capital’s train station is ‘over-run’ with gangs stealing and ‘groping girls’.And at asylum centres in the country the number of threats and violent incidents has doubled.”Paying tribute to her daughter Mrs Mezher said: “She was my air, she was my everything, why her?”She was a just and fair human being. There were so many who loved her. She was my daughter, my friend.. my mate.”Miss Mezher’s best friend-of-eight-years Lejla Filipovic, 22, said she has lost a ‘sister’.

She wrote: “She was so goodhearted, she wanted to do so much in life.

“I know that some of the kids aren’t in a good place right now, because they came without their parents, so sometimes I was worried, but I knew that she had good co-workers.”

Sweden accepted more than 160,000 asylum seekers in 2015, more than any other EU state per capita.

Prime minister Stefan Lofven admitted that many people are fearful of attacks similar to the killing of Miss Mezher, because ‘Sweden receives so many children and youths arriving alone’. 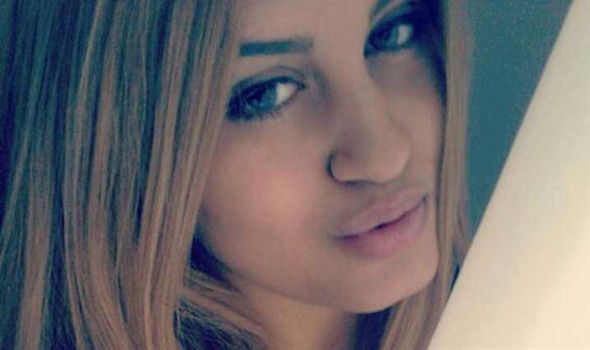 Alexandra Mezher was knifed at a migrant reception centre

A 15-year-old Somalian boy who lived at the reception centre has been arrested and is being kept in custody.The country’s laws would usually see him placed in a youth detention centre until trial but anger over the killing has led police to make the unusual call.Police confirmed he has been arrested on suspicion of murder.Ten youths between the age of 14 and 17 currently live at the centre, which has been closed for investigation. 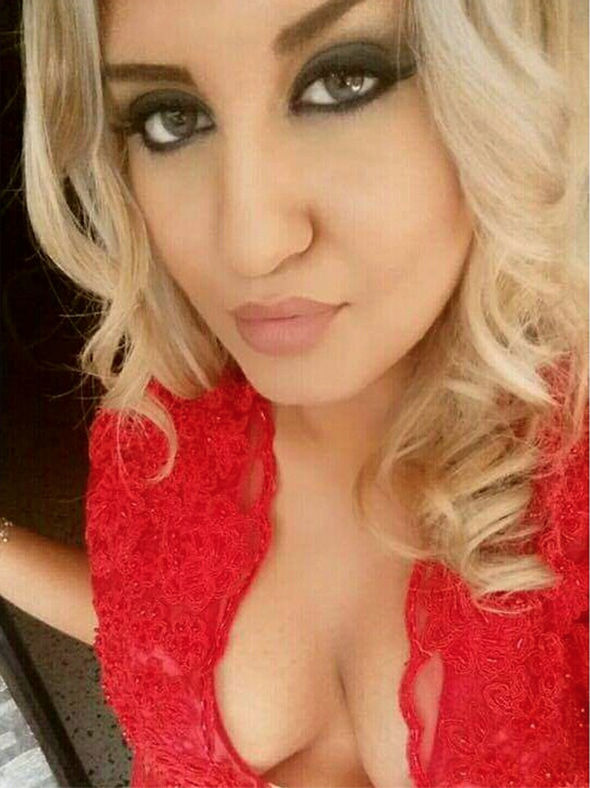 Alexandra Mezher was ‘an angel’ who wanted to do good for others, her family said

Alexandra, of Lebanese Christian origin, lived with her parents Boutros, 46, and Chiméne Mezher, and her two younger brothers in Borås, some 40 miles from Molndal.Miss Mezher’s father came to Sweden from Beirut, Lebanon, in 1989 and her mother moved there three years later.According to family members she had only been working there ‘a few months’.Paying tribute, her cousin told Swedish press: “It is so terrible. She was a person who wanted to do good, who wanted to be good.”We have cried a lot. She was such a nice person, warm and happy. She was an angel.”The pretty 22-year-old, a psychology graduate from the Blekinge Institute of Technology in Karlskrona, had spent years researching why people commit crime.She completed a three-year course in social science for communication and learning and called her dissertation, ‘The road to non criminal – a lifestyle change’.Written with another student, she researched the factors which help offenders break from a life of crime.

It concludes that to make a lifestyle change and be able to break a delinquent behaviour, ‘social workers need to build trust in relationships’. 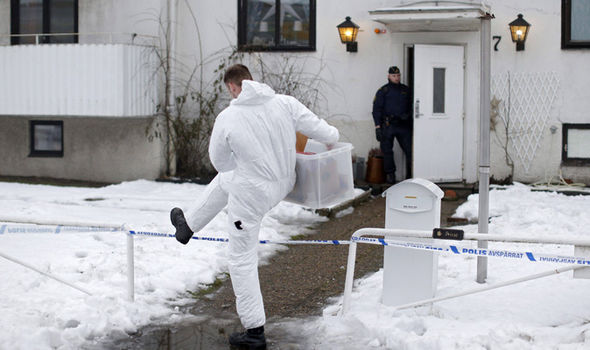 One migrant has been arrested after woman stabbed to death

Police have praised the bravery of the two residents of the migrant centre who tackled the killer, saying their courage had saved lives.”The two boys who over-powered the knifeman probably saved lives,” a Gothenburg Police spokesman told MailOnline.”When the first patrol came to the centre they were informed that the boy was held down by two other boys who were living there.”When they entered the crime scene they found him on the floor being held by these two boys.”The incident comes amid rising tensions over migration in Sweden. The number of threats and violent incidents at asylum facilities doubled between 2014 and 2015.Earlier this week, Stockholm police warned that the capital’s main train station is ‘overrun’ by gangs of Moroccan street children, who are ‘stealing and groping girls’ and have called for more resources to cope. 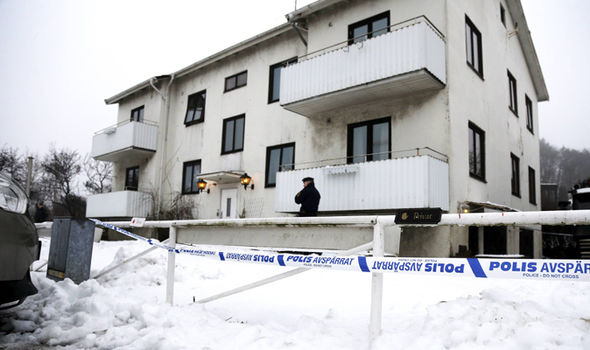 Lone migrants have been moved to a hotel after the stabbing

Police spokesman Stefan Gustafsson said: “The youths currently living at the centre have been moved to a hotel for the night.”Mr Fuxborg said: ‘These kinds of calls are becoming more and more common.’We’re dealing with more incidents like these since the arrival of so many more refugees from abroad.’According to the Swedish migration agency violent incidents at reception centres have doubled from 2014 to 2015. 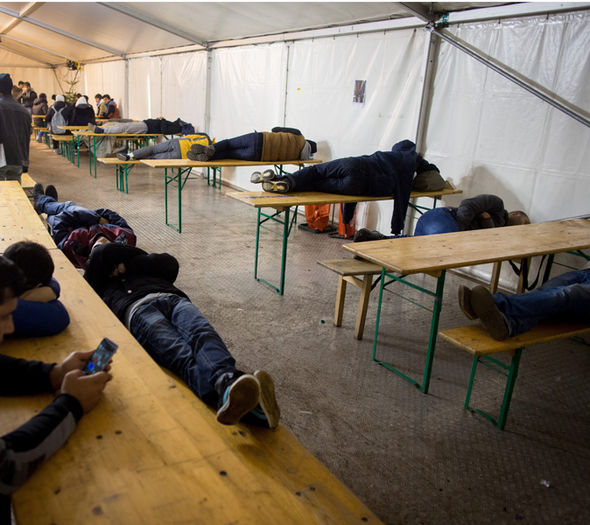 Lone migrants have been housed separately to families in some countries

In 2014 148 incidents were reported against 322 in 2015.The incident came as National Police Commissioner Dan Eliasson on Monday requested 4,100 additional officers and support staff to help fight terrorism, carry out migrant deportations and police asylum accommodations.Mr Eliasson told Sweden’s TT news agency: “We are forced to respond to many disturbances in asylum reception centres.”In some places, this takes significant police resources. 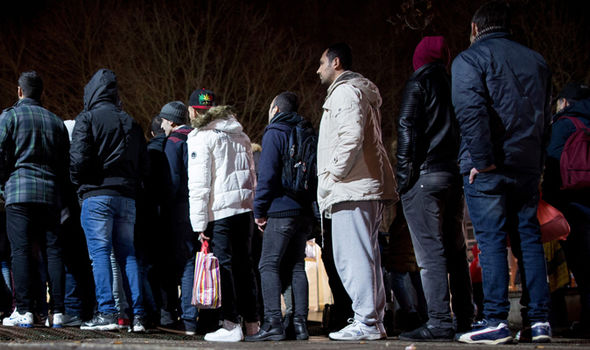 Europe has seen an influx of lone male migrants

“This was not the case six months ago and it means that we won’t be able to respond as effectively in other areas.”Swedish police are worried about the increase and have asked the Government for more resources to tackle the growing tensions.According to Mr Eliasson, more than 2,500 more police officers are needed to deal with the migrant influx.Last year over 180,000 refugees entered Sweden, according to the Swedish migration agency.European Union justice and interior ministers have started urgent discussions on how to tackle the migrant crisis amid the stream of new arrivals and continuing disagreements over how to seal off borders.Yesterday ministers met to decide whether to seal Greek borders to halt the flow of migrants.
It comes days after EU President Donald Tusk warned that Europe’s passport-free travel area, known as Schengen, could break apart if the migrant strategy is not sorted out within two months.Ministers will be seeking to stem the flow through Greece, where authorities are struggling to contain the crossings by boat from Turkey.Belgium’s interior minister, Jan Jambon, says that Greece “has to do what it has to do – namely, controls. And if that is not the case, we need to look closely into that.”