Angry parents have demanded a primary school in Holland changes its curriculum after a video showing children learning how to pray in a mosque emerged.

Local media said the mosque in question is believed to be the Ghulzar e Madina in the city of Zwolle, which has previously been visited by radical preachers from Pakistan.

Among them was M Anas Noorani Siddiqui, who promoted the death penalty for those who insult the Prophet Muhammad and once said ‘non-Islamic Dutch behave like dogs and b*****s.’ 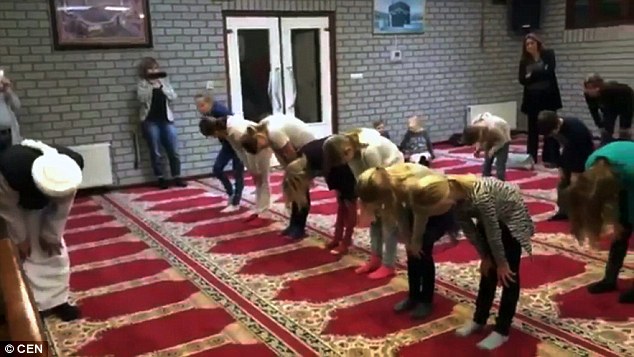 The children, who are mainly from Christian backgrounds, are shown how to pray by an imam

The video shows an imam explaining to the children how Muslims pray, with all boys forced to stand on one side of the room while the girls are on the other side.

The children, most of whom are thought to be Christians, are told to put their ‘elbows on the ground’ and ‘hands close to your ears’.

The video was reportedly taken last year but it has emerged after a Dutch MP spotted it and called for schools not to participate in similar ‘politically correct activities.’ 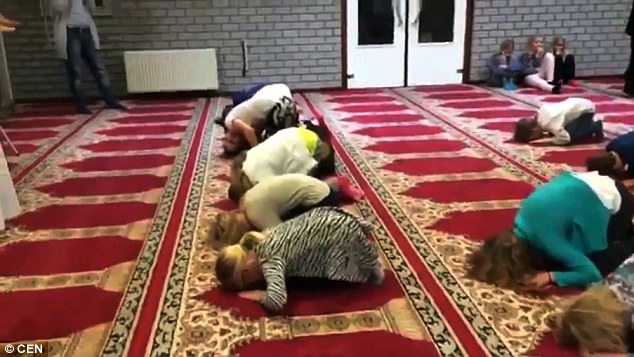 The girls are shown how to prostrate themselves when praying. They were taught separately from the boys, as is the Muslim tradition

Harm Beertema, 64, an MP for Geert Wilders’ far-right Freedom Party, urged parents: ‘Refuse to allow your child to participate in such “away-with-our-culture” excursions. You are deciding, not the school.’

On social media hundreds of parents reacted, some sharing their own stories of ‘politically correct school curriculums’.

One parent said: ‘I recently found out my son was forced to sing “welcome, welcome refugee” instead of Christmas songs.’ 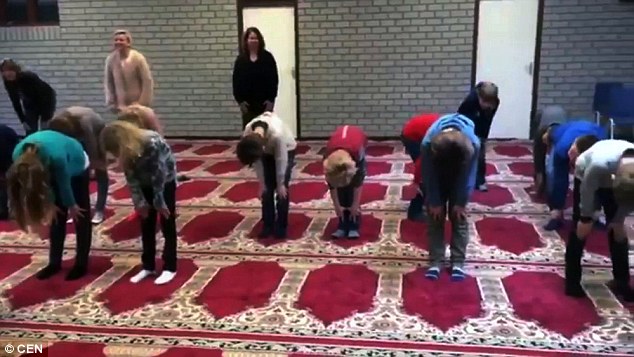 The teachers are shown in the background overseeing the lesson. Some parents have reacted furiously to the video, claiming it is political correctness gone mad

One teacher said his school was visited by education Inspectors who questioned why the Year 4 classes had not ‘visited a mosque yet’.

The Dutch national curriculum says children have to ‘learn the main points about the religions which play a big role in the multicultural Dutch society’.

In July angry parents slammed officials after discovering in a video that a class of primary school children at a Catholic school in the town of Dongen visited a mosque in Rotterdam as part of their school curriculum.

The Netherlands is holding a general election in March and the Freedom Party and Geert Wilders is expected to do well, partly on the back of such politically correct blunders which do not play well with ordinary Dutch voters.