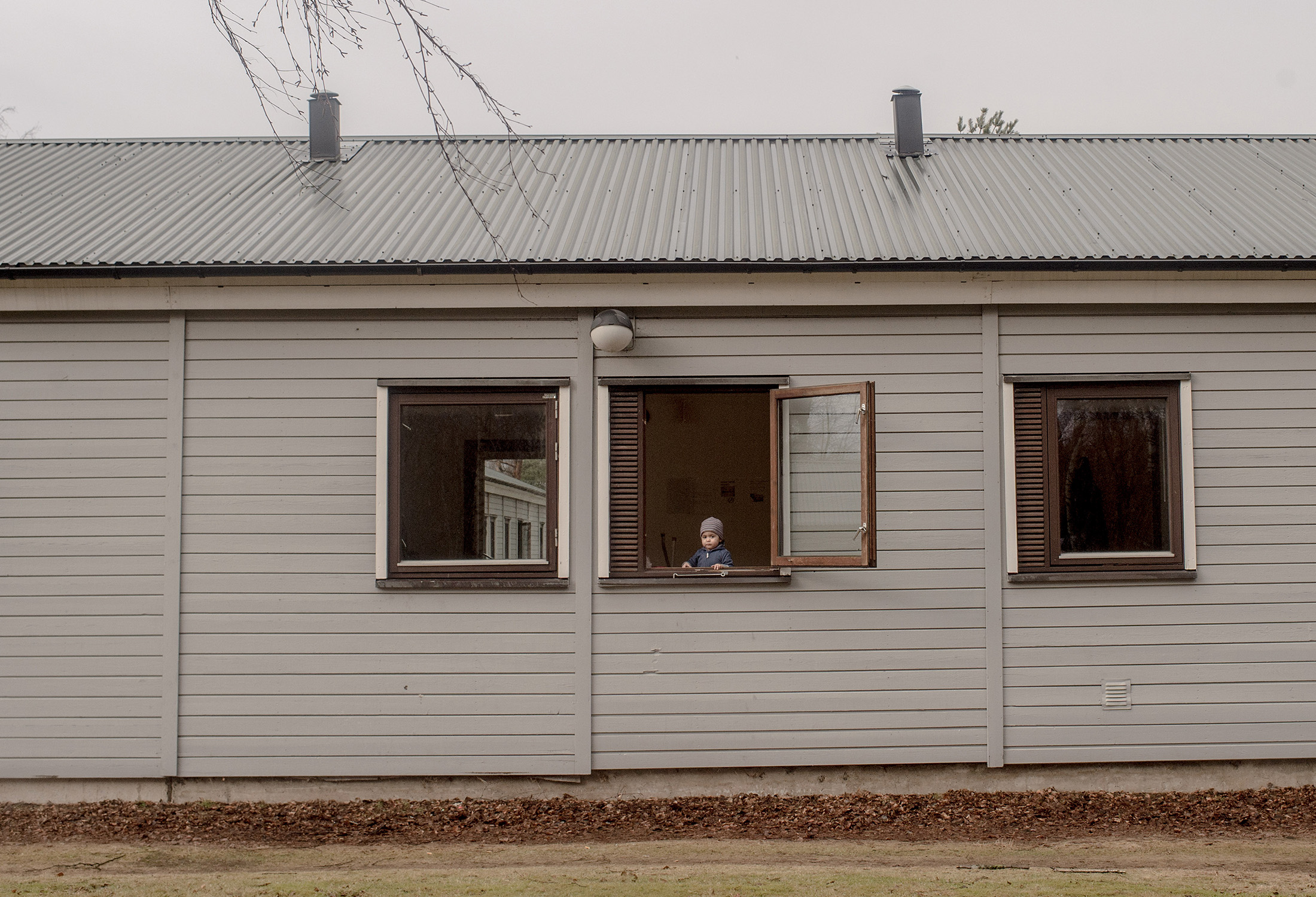 Photographer: David Ramos/Getty Images
When it comes to wealth, health and hospitality, Sweden has few rivals. But the same qualities that make the country a beacon of hope for the world’s huddled masses are straining it at the seams.

To see how close to the limit a record inflow of refugees is pushing Swedish generosity, visit Halmstad, a 14th century gateway to the North Sea known for its pristine beaches and golf courses. With no vacant apartments, the welcome wagon here is a double row of shabby, stifling trailers hauled in to house the overflow from the nearby Arena Hotel. There, almost 400 asylum seekers from Syria, Afghanistan and beyond live four to a room, all but forbidden from working until their claims are adjudicated. The process can take years.

Men with little to do but sleep and smoke crowd the lobby as kids careen down corridors on bikes. The sports bar, once busy with locals, is now a halal dining hall, the outdoor pool fenced-off and abandoned. It’s a scene increasingly common across Sweden, which welcomed 163,000 refugees last year alone, or about 1.6 percent of its population, a ratio equivalent to 5.1 million in the U.S.

Three years after Sweden and its Nordic neighbors were declared “The Next Supermodel” of fiscal prudence by The Economist, the welfare system pioneered in Stockholm is starting to buckle under the weight of Europe’s biggest migration wave since World War II.

Even dovish politicians concede the pace of refugee spending, which is on track to surpass that for national defense in Sweden for the first time this year, can’t be sustained without revisions to a social contract based on high taxes, cradle-to-grave entitlements, tight regulation and AAA credit.

Few know the perils and promise of Scandinavian welfare better than Sweden’s first Muslim minister, Aida Hadzialic. She fled Yugoslavia with her family at the age of five and settled in Halmstad, where she served as deputy mayor before being named minister for secondary education in 2014. And what worries her most is the viability of a model that literally saved her life.

“If we don’t make the changes needed to maintain trust that our tax money goes to the right thing, people may start wondering if it’s worth paying,” said Hadzialic, 29. “Then we’d create a new gap between people. That’s not the Swedish model, that’s not the Sweden we know.”

It’s a debate raging across the European Union as the human tide of mainly Muslims adds to crises eating away at the bloc’s cohesion and encouraging extremist parties. Even in Sweden, where centrists have ruled for decades, discontent is on the rise. Polls show backing for the governing Social Democrats hovering near the 50-year low of 24 percent it reached in January, while support for the anti-immigrant Sweden Democrats has risen five points since the 2014 election to 18 percent.

Investors have already registered their alarm.

As the inflow of refugees peaked late last year, the yield bond-buyers demand to hold Swedish debt over that of Germany, the European benchmark, surged to a nine-month high. Though that spread has narrowed, the government has warned that outlays for migration will further squeeze the $110 billion national budget. Ethnic tensions are adding to the strain, with a rash of fires and threats of mob attacks at refugee centers across the country.

For most Swedish citizens, though, there’s little question their welfare state — as much an anathema for U.S. conservatives such as Donald Trump as an inspiration for left-wingers like Bernie Sanders — is worth protecting.

In the 19th and early 20th centuries, famine and poverty drove more than a million Swedes to America. After World War II, when neutrality left cities and factories unscathed, Sweden enjoyed an industrial boom engineered through tight co-ordination between the state, unions and major employers like Volvo and Ericsson.

Today, Swedes can consider themselves among the luckiest people on Earth. At 82, their life expectancy is two years longer than Americans’ and their net disposable income, $29,185 per household, exceeds the U.K., France and Japan. What they lose with a top income tax rate of about 60 percent, they gain back with free, high-quality hospitals and schools, a vast program of subsidies for childcare and housing, and some of the world’s safest and most modern cities.

But providers of public services say they can’t keep those standards up if refugees, the vast majority young and male, keep coming.

In Malmoe, Sweden’s third-largest city, elementary schools director Anders Malmqvist said he faced “an investment mountain” to upgrade aging facilities even before the latest round of migrants. To keep up, he needs to build about 25 new schools by 2023 at a cost of as much as 6 billion kronor ($720 million) — an amount that will consume the area’s entire investment budget if changes aren’t made, leaving nothing to maintain existing infrastructure such as roads and bridges.

Malmoe is not alone.

Throughout Sweden, local governments are jockeying for scarce funds to build schools and housing to accommodate refugees, who are being settled on a pro-rata basis to ease assimilation.

Stockholm, a city of 920,000, has to find homes for 2,810 newcomers by the end of the year, but it simply doesn’t have the space. As a result, officials plan to assemble temporary “pavilions” at locations they’re keeping secret to head off neighborhood protests.

Building new housing for immigrants at a time when half a million Swedes are waiting eight years on average for rent-controlled apartments around Stockholm is becoming a flash point, said Joakim Ruist, an economist at Gothenburg University. The only “logical” way to stimulate new construction is to lift price controls so developers have more incentive to build, a move that won’t be popular with voters, he said.

“No modern welfare state has had an inflow of refugees per capita that’s equivalent to Sweden’s,” Ruist said. “We’ve gone past the breaking point for the housing situation.”

Fearing a public backlash over housing and handouts, which can be worth $28,000 a year for a single mother of two, almost what the average American worker earns, Sweden is trying to walk back its open-door policy. Citing an “unsustainable” pace of arrivals, Prime Minister Stefan Loefven has re-imposed border controls and pledged to step up deportations of rejected asylees. Family reunifications are also being drastically curtailed.

Still, Loefven is trying to look on the bright side, arguing the influx of mostly young men will revitalize an aging workforce. About 20 percent of the population is over 65, compared with just 14 percent in the U.S., while a third of the people currently waiting for an asylum ruling are under 18.

Transitioning more migrants, most of whom have far less education than the average Swedish citizen, into jobs poses its own set of challenges.

Wages in Sweden are largely set across industries, through complex deals between unions and employers that include strict requirements on qualifications. Once hired, workers are difficult to lay off, so tinkering with any elements of this finely tuned mechanism risks upending the entire system.

The structure guarantees one of the world’s highest standards of living for those with skills, while those without can find themselves locked out: only one in four refugees finds a full-time job in their first eight years in Sweden.

Until recently, there was little question Sweden, with debt far below the European average at less than half of gross domestic product, had the resources to successfully integrate its newcomers. Hadzialic, the schools minister, and Hanif Bali, an IT entrepreneur and member of parliament for the Moderate Party, are living proof of that.

But like Hadzialic, Bali, who arrived from Iran without parents as a toddler in the 1990s, is starting to think his adopted homeland may just be too generous for its own good.

“If we don’t act soon we’ll have a large group of refugees who won’t be able to enter the labor market,” said Bali, 28.

Just the thought of being a burden on society makes Hasan al-Bundok sigh.

The 45-year-old lawyer fled Syria’s war in search of a better future, first to Turkey, then across the Mediterranean to Greece and eventually Halmstad. The plan was to find a job, establish a home and then send for his wife and four children back home. But that was nine months ago and he’s still languishing in legal limbo at the Arena Hotel.

“In my country, I’d wake up at six o’clock, have breakfast with my children and go to court,” Bundok said. “But here, I’m like an animal, just eating and sleeping. I don’t want to be a second-class citizen. I want to work.”

–With assistance from Johan Carlstrom.