Sweden beefs up defense in case of Russian invasion

Russia: Officials are ordered to return to Cold War tactics and implement their Total Defence Strategy as fears of invasion grow

Officials in Sweden have been ordered to ensure that they are ready for war as fears of a Russian invasion grow.

The country’s Civil Contingencies Agency has sent out a letter to all local authorities telling them they must be better equipped to respond to the threat of war.

It is believed the letter was prompted by Sweden returning to their old Cold War-era ‘Total Defence Strategy’. 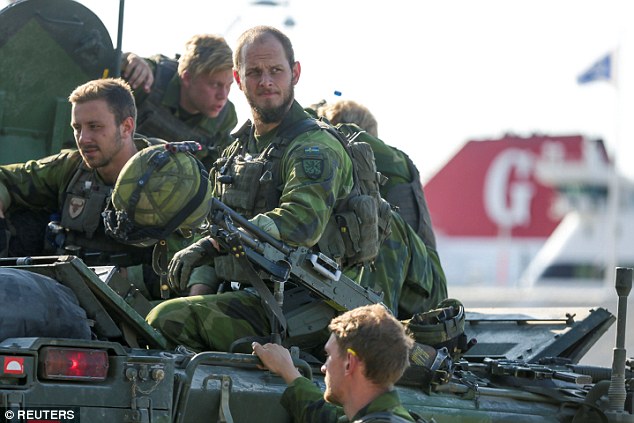 Officials in Sweden have been ordered to ensure that they are ready for war as fears of
a Russian invasion grow. Pictured are Swedish troops training

The strategy places emphasis on defending the nation from overseas threats by taking economic and civilian precautions as well as military ones.

It was ordered to be implemented last December citing a deterioration in the ‘security situation’.

But despite the instructions, the MSB’s information head Svante Werger said: ‘There is nothing to indicate that war is likely, but we have the government’s mandate to plan for it.’

However, there has been a backlash against the letter, with some local leaders saying the requirements placed on municipalities were unrealistic.

Meanwhile others have accused the Swedish government of using the excuse of Russian aggression to justify spending more on the country’s military.

The letter comes as officials on Gotland, Sweden’s militarily strategic island in the Baltic Sea, said they likely will turn down a Russian request to rent harbour space after the government warned it could harm the country’s defense and political interests.

‘Following the information we got from the government, we very likely will say ‘no,” Tommy Gardell, head of the island council’s technical board, said. ‘We will align with the government.’

Tensions in the region have grown between Baltic NATO members and Moscow, including reports of airspace violations by Russian military aircraft.

Non-aligned Sweden and Finland have watched with increasing trepidation, stepping up their own military activity with cross-border exercises and drills with NATO countries.

In September, Sweden stationed permanent troops on Gotland, which Hultqvist described as sending a signal after Russia’s 2014 annexation of Crimea and its ‘increasing pressure’ on the Baltic states of Estonia, Latvia and Lithuania.

It shares an 833 mile border with Russia, but questions over the legality of the country’s independence have made Finnish leaders uneasy.

Sweden has fought in many historical wars including a two year conflict with Russia between 1788 and 1790.

It was provoked by the Swedes attacking St Peterburg prompting Denmark, Norway, Prussia and Great Britain to declare war on Sweden.

However, the Swedes suffered a heavy defeat during the Battle of Öland, but months later they recorded a victory during the Seocnd Battle of Svenskund and soon after a treaty was signed to end the conflict.

During the Union Era of Sweden, the country then fought its last war with Norway, which ended in 1814 after Norway gained independence.

Sweden then declared neutrality during the First and Second World Wars and didn’t take any part in either.

More recently, the country had been taking part in Nato exercises with countries such as Great Britain and the United States in the Baltic.

Russia’s military escalation on Europe’s border has triggered the West’s biggest show of force in the region since the Cold War as Nato continues to square up to Vladimir Putin.

The moves are designed to stop Moscow taking over or undermining its former Eastern European satellites as it has with Crimea and Ukraine.