Stockholm University’s English-language Twitter account posted a swastika and a message in Turkish after it was one of several targeted in a cyber attack.
Via: thelocal.se

Thousands of accounts, as diverse as Amnesty International, Forbes, German media giant Welt and tennis legend Boris Becker, tweeted Turkish propaganda relating to its ongoing diplomatic row with Germany and the Netherlands about its April 16th referendum designed to give the Turkish president increased power.

Stockholm University’s English-language account was among those compromised in the attack.

“The tweet was quickly detected and deleted,” the press office wrote in a statement on Wednesday morning.

“The University is now investigating what happened, and efforts are being made to increase security regarding the University’s social media channels,” it added. 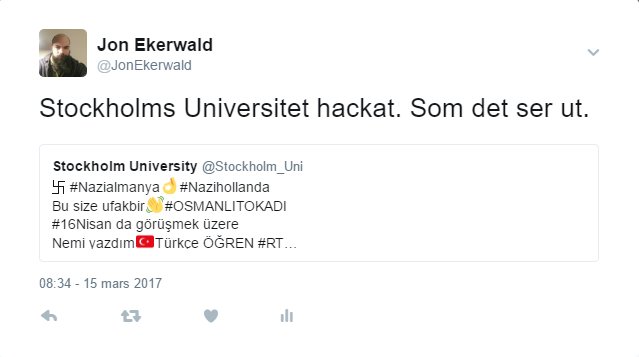 A Stockholm University spokesperson confirmed to The Local it uses the service, but said it had now temporarily disconnected all its third-party applications.

Twitter Counter tweeted that it was aware it had been hacked and had launched an investigation into the matter. It stressed it does not store users’ Twitter passwords or credit card information.

Assuming this abuse is indeed done using our system, we’ve blocked all ability to post tweets and changed our Twitter app key.

Attack on Swedish Mainstream Media by Hackers. Why Swedish Media is Hated