Russia and Turkey Head for Clash on Syria Border 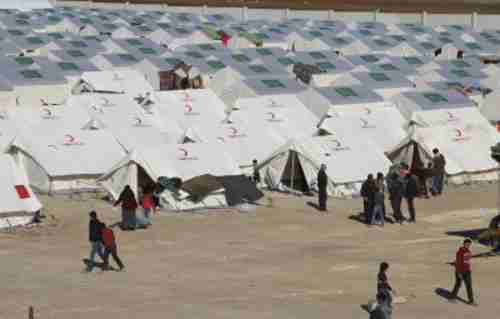 A report by Human Rights Watch (HRW) says that Russian warplanes used cluster bombs in at least 14 attacks across five provinces since January 26. Cluster bombs open in flight and scatter dozens of explosive munitions over wide areas. They are particularly effective in killing large numbers of civilians over a wide area.

The United Nations has warned that hundreds of thousands of civilians could starve if, as feared, forces loyal to the Syrian government encircle Aleppo and submit it to a siege, backed by Russian warplanes. It said that a huge new wave of refugees would be forced to flee from a Russian-backed assault. Independent (London) and Fox News and AP

Thousands more Syrians continue to flee Syrian army forces and Russian warplanes pounding Aleppo, and are joining the tens of thousands already massed on the border with Turkey.

The Red Crescent (the Islamic branch of the International Red Cross) has been overseeing refugee camps in Turkey, as well as aid to hundreds of thousands of refugees in Turkey, and is now providing eight tent camps and humanitarian aid for refugees in Syria massed on the border with Turkey. They have provided 2,000 tents, as well as blankets, food, water, and hygiene kits.

However, aid groups say that tents on the Syrian side of the border are overcrowded and that food is in short supply. The United Nations is demanding that Turkey open its border to “all civilians who are fleeing danger and seeking international protection as they have done since the start of this crisis.”

There are two major reasons why Turkey is reluctant to open its border to tens of thousands more refugees:

Some Turkish columns are calling European Union calls to open the border “a joke”:

It’s almost like a bad joke. At the very moment when EU member states are doing their utmost to close their borders to Syrian refugees, the EU’s Foreign Policy Chief Frederica Mogherini is calling on Ankara to admit the tens of thousands of refugees piled up on Turkey’s borders near the town of Kilis, following the recent advances near Aleppo by al-Assad regime forces supported by Russia and Iran.

Mogherini is saying that there is a moral if not legal duty to provide protection to these people. According to her, the EU is also providing funds to ensure that Turkey has “the means, the instruments, and the resources to protect and host the people who are seeking asylum.”

This appears to be no more than a flimsy attempt to retain a moral high ground against Turkey at a time when Europe is reacting deplorably to the refugee crisis and therefore has much to answer for. What Mogherini says also completely disregards what Turkey has been doing for the past four years.

Turkish columnists also note that the EU has promised financial aid for refugees in Turkey, but that the financial aid has not materialized. Daily Sabah (Turkey) and Hurriyet (Ankara) and Washington Post

There is another, more strategic reason why Turkey is setting up refugee camps on the Syrian side of the border near Aleppo.

For four years, Turkey has advocated setting up a “buffer zone” on the Syrian side of the border, starting at a time when hundreds of new refugees were entering Turkey each day rather than many thousands. Turkey received no international support for the idea, because of the concern that it would bring Turkey’s army into conflict with Syria’s army. (“17-Mar-12 World View — Turkey once again talks about a ‘buffer zone’ in Syria”)

Now, with tens of thousands of Syrian refugees massed on Turkey’s border, Turkey has managed to set up a de facto buffer zone. Turkey considers this even more urgently needed today not only because of the larger mass of refugees, but also because Turkey wants to prevent the hated Kurds from creating a de facto Kurdish state along the entire border, from western Syria all the way west into Iraq.

However, the concerns today about a clash with Syria’s army are just as real. Syrian officials are making it clear that they intend to “control the borders” with Turkey.

[There would be no letup in an army advance, which aimed] to liberate cities and villages that were controlled by the terrorists for 3-1/2 years, and also an attempt to liberate the city of Aleppo from the crimes of terrorism. [We intend] to control our borders with Turkey, because Turkey is the main source of terrorists, and the main crossing for them. […]

We hope that the operation will continue in the north until we control the borders and stop the terrorists who Turkey has since the start of the crisis worked to send to Syria.

This is not something that Turkey would want to see, as it would certainly mean Kurdish control of the entire length of the border between Syria and Turkey.

Perhaps Turkey will back down and let the masses of refugees into Turkey, and allow the Syrian army to take control of the border region. Or, perhaps Syria will back down, and allow Turkey to keep its de facto buffer zone in Syria along the border.

Syrian army forces are already just 25 km from Turkey’s border. If neither side backs down, then there will be a clash in the next few weeks.

As long time readers know, Generational Dynamics has predicted for years that the entire Mideast is headed for a major war between Jews and Arabs, between Sunni and Shia Muslims, and among various ethnic groups. Things have been moving very quickly for the last few months, and each new week seems to have some event that brings that prediction closer to fruition. Reuters