Norway MP: ‘We won’t end up like no-go zone Sweden’

A GOVERNMENT politician has said the lawless conditions pushing Sweden to breaking point must never be allowed to flourish in Norway.

Progress Party leader Siv Jensen gave a fiery speech on Tuesday evening, kicking off the battle for the electorate’s vote ahead of general election in September this year.The Finance Minister, who’s party is in a coalition government with the Conservatives, warned uncontrolled immigration and lack of integration was a great threat to the liberal country’s peaceful way of life.Citing the turmoil in neighbouring Sweden which she claimed could spread across the border if the government failed to maintain a strict immigration policy, Ms Jensen said: “Lack of integration can divide our country.“The experiences from our closest neighbouring country should be a wake-up call for most of us. 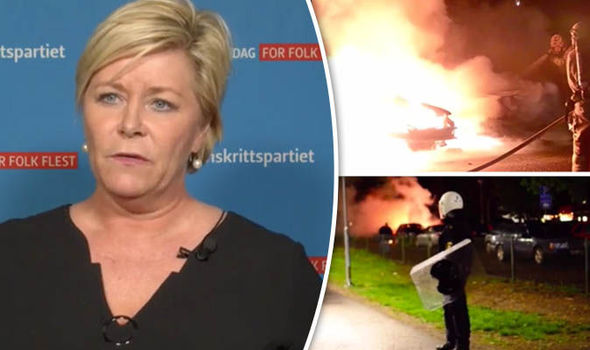 Siv Jensen vowed Norway would not end up like ‘lawless Sweden’

“Lawless neighbourhoods, inner justice, violence and criminal activity and gang activity is a testament to a completely failed integration and immigration policy.”

“In 2009, I warned against this development during a visit to the hard-hit neighbourhood of Rosengard in Malmo,” Ms Jensen continued.

“I was meeting with mockery and massive critic. Some even said the Progress Party shouldn’t discuss immigration policy but stood firm during the storm and time has shown those warnings were entirely justified.

Lack of integration can divide our country –  Siv Jensen

“When NRK journalist Anders Magnus reported from Rinkeby, another hard-hit Swedish neighbourhood in May last year, he was attacked with stones.”

Continuing her speech, the right-wing politician added her party would never allow “Swedish conditions” to flourish in Norway.

Ms Jensen said: “Like Rosengard, the areas are turning into parallel societies, with their own sets of norms and rules, and where criminals have taken over the public sphere, where religious extremism is commonplace.

“Swedish conditions are not an alternative for Norway as long as the Progress Party has a say in the matter.”

Swedish authorities have repeatedly warned they do not have enough resources to cope with the “unprecedented” influx of migrants to the country.Since the migrant crisis began in 2015, the liberal nation has seen a surge in violence and criminal activity, with police placing more than 50 areas on a “no-go zone” list.In a report by Sweden’s National Criminal Investigation Service, which was published last year, attacks on officers are detailed, including police cars being stoned by masked groups.At the time National Police Commissioner Dan Eliasson said he needed a further 4,100 officers and specialist staff to deal with the surge in incidents since migrants entered the nation in their thousands.Since then police have warned the force is facing an existential crisis with on average three police officers handing in their resignations a day, with an estimated 1,000 officers quitting in 2016.
Follow  SaveMySweden