Home » Swedenstan » No-go zones ‘do not exist in Sweden’

No-go zones ‘do not exist in Sweden’

Sweden’s embassy in Budapest has sharply rebuked Hungary after an official leaflet claimed that Stockholm and other European cities had become “no-go areas”.

Flyers warning of “hundreds of no-go areas in European cities”, which highlighted Stockholm along with London, Brussels, Marseille, Berlin and the Copenhagen-Malmö area, were this month sent to millions of households in Hungary ahead of its referendum next month on EU refugee quotas, reports the Financial Times.

The leaflets claimed that migrants have overrun hundreds of “no-go” areas in Europe which “the authorities cannot keep under control” and where “the norms of the host society (…) barely prevail”.

Counsellor Anna Boda, the Deputy Head of Mission at the Swedish Embassy in Hungary, told The Local via email on Friday that representatives from Sweden, as well as Germany and the UK, have been in contact with Hungary’s Foreign Minister Peter Szijarto to protest against “the false information”.

“It is important to us that accurate information about Sweden is given to the citizens of Hungary. The embassy has therefore had reason to object sharply to a map of Europe with red markings in a handful of member states, including Sweden, in which the Hungarian government claims that so-called ‘no-go zones’ exist, where police and the state have no control over citizens’ safety,” she said. 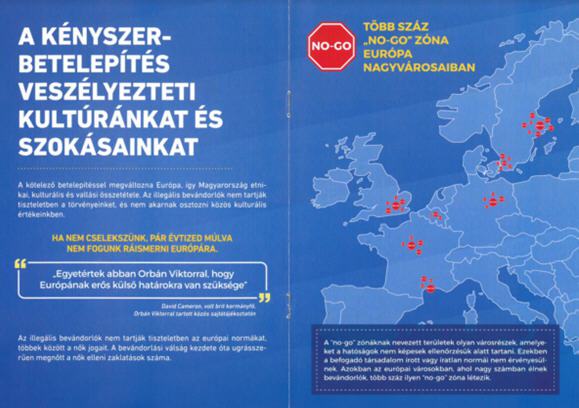 Szijarto defended the claims earlier this week, telling the BBC’s Newsnight programme that the figures were “based on official reports from police and other security agencies”.

A number of Swedish cities, including Gothenburg and Malmö, have hit the headlines recently over spates of car burnings and unrest. In February police listed 15 districts in Sweden as “especially vulnerable areas” where crime and poverty rates are high. However, they are not formally referred to as ‘no-go zones’.

“It is important to be clear: such zones, however they are labelled or defined, do not exist in Sweden. It is of course very unfortunate when, as in this case, incorrect information is spread to Hungarian citizens who thereby risk getting a biased picture of our Europe and individual member states,” said Boda.

She added that embassy representatives had spoken to the Hungarian foreign ministry about the controversial map as early as this spring, after it was first published on a government website.

The flyers it was reprinted on this month were distributed ahead of a referendum in Hungary on October 2nd on whether or not to accept EU plans to resettle migrants into the country, which the government led by conservative Prime Minister Viktor Orban strongly opposes.

Sweden, which took in an unprecedented 163,000 asylum seekers last year, wants to send around 1000 people back to Hungary under the Dublin Convention, which states that refugees should seek asylum in the EU country where they were first registered.

“From a Swedish perspective, it is important that those challenges Europe is facing in terms of the increasing number of people fleeing war, terror and oppression around the world can be met through common solutions within the EU as well as globally,” said Boda.

The Local has contacted the Hungarian Embassy in Stockholm for a comment.

Last month, after headlines were published in Turkey urging people not to travel to Sweden, citing a high number of reported rapes, a spokesperson for the Swedish foreign ministry told The Local that it was “not the first time rumours [were] being spread about Sweden in other countries”.

When asked at the time if he was concerned that the claims would harm Sweden’s international reputation, he replied: “I would not say concerned, but we always make sure that if there are rumours or questions about Sweden we respond to them.”