A 15-year-old girl was stabbed down on Wednesday afternoon in a drugstore in Rhineland-Palatinate by an Afghan boy of the same age. He was the girl’s ex-boyfriend. This is what leading chief prosecutor Angelika Möhlig said on a press conference. An arrest warrant was issued.

The boy is in preliminary detention under strong suspicion of manslaughter. He has been refusing statement so far. According to the information, the girl broke up with the accused in the beginning of December. On wednesday, they encountered each other accidentally. The Afghan followed his ex-girlfriend and stabbed her repeatedly in the drugstore.

After the relationship of several months had ended, the youth had announced on social media that he wanted to “catch” his ex girlfriend, said Police Deputy Chief Eberhard Weber.

The Muslim Afghan entered Hesse in April 2016 as an unaccompanied underage refugee. He had been living in Neustadt an der Weinstraße (Rhineland-Palatinate) in a living group with three other youths since September 2017. He already had a record with the police for a hassle on the school yard.

Perpetrator Stabbed Her With a Kitchen Knife

The parents of the victim had pressed charges against the perpetrator for harassment two weeks ago. After the charge, the youth ignored the police’s citation several times. As a result, police delivered the citation personally to him before noon on the day of the crime.

The crime weapon is a 20 centimeter long kitchen knife. The weapon was secured, according to Dieter Lippold, leader of the investigation team. The Afghan did not resist arrest. There were no indications that he was under the influence of drugs. According to Lippold, he seemed quite indifferent. The two companions of the girl helped to detain the stabber until the police’s arrival.

The store is open again on the day after the deed, but shock and mourning run deep.

People have put flowers in front of the door, and lit candles. Customer Diana Jäger (31) was in the drugstore to fetch her photos at the evening of the deed. She heard an argument, then the girl’s screams: “I did not hear what it was about.” Then, the girl was lying on the floor, teenagers stood beside her. Diana Jäger: “They said, ‚Mia, stay awake!‘”

Everything went very fast. Jäger also saw the alleged perpetrator, she says: “He had a dirty smile on his face.”

The girl’s uncle, Jürgen Stöffler (55), says: “The last time I saw her was at our family celebration on Christmas day. We were in a Greek restaurant in Kandel. Now she is dead and I still can’t believe it. My brother-in-law called me yesterday and cried on the phone: ‚Mia was killed.‘”

The dm store manager, Roman Melcher (50), said : “I wish to express our deepest sympathy to the family. We are deeply saddened.” 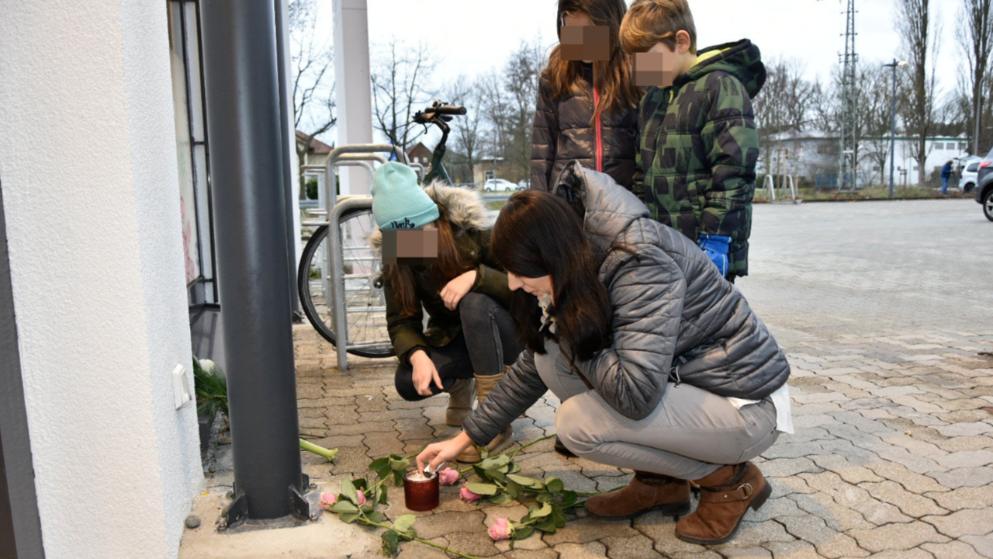 In the afternoon, about 100 people of Kandel quietly and helplessly gathered in front of the supermarket.