Mohammed Emwazi, who was killed in a US air strike in 2015, appeared in a number of videos in which captives including British aid workers David Haines and Alan Henning were beheaded

The first pictures of the remaining ISIS ‘Beatles’ have been released after the pair were snared on their way back into Europe supposedly disguised as refugees.

By – Rod Ardehali and Rory Tingle and Thomas Burrows

Londoners Alexanda Kotey, 34, and El Shafee Elsheikh, 29, were captured in Syria last month while trying to escape to Turkey, according to Kurdish-led forces.

Their capture comes amid fears they were trying to return to the UK intending to bring bloodshed to British streets.

Kotey and Elsheikh are two of four fanatics dubbed ‘The Beatles’, because of their British accents, whose leader ‘Jihadi John’ heinously beheaded hostages on camera.

The terrorists, both dual nationals, had been stripped of their British citizenship by the Home Office in a bid to stop them re-entering the UK.

The future of the final two suspected members of an Islamic State execution group dubbed ‘The Beatles’ hangs in the balance following their capture in Syria.

Londoners Alexanda Kotey (left), 34, and El Shafee Elsheikh (right), 29 were captured in Syria last month while trying to escape to Turkey, according to Kurdish-led forces. The pair are two of the four fanatics dubbed the Beatles because of their British accents

Both Kotey and Elsheikh are under guard in the caliphate’s former heartland having fallen into the hands of Kurdish militia fighters in January.

It remains unclear who will determine the pair’s fate, with a US Department of Defence (DoD) spokesman saying they were ‘still considering options’.

While Defence minister Tobias Ellwood called for their trial to be held at an international war crimes court.

He told the Daily Telegraph: ‘Given the scale of foreign fighters we should consider an agreed international process involving The Hague, which ensures terrorists from any origin are transparently and fairly held account for their actions.’

Intelligence extracted from the two militants has already sparked operations hunting other jihadis down, according to reports.

Officials hope that both Britons’ capture may lead to information on what happened to remaining hostages, including British journalist John Cantlie, who appeared in a series of propaganda videos and then vanished.

It is also hoped that they may yield information about the whereabouts of their victims’ bodies.

The first picture of Kotey, exclusively obtained by ITV News, shows the jihadist looking bearded and unkempt following his detainment by the Syrian backed forces.

‘We captured some big commanders. One of them is Alexanda Kotey,’ Redur Khalil said. ‘He was captured by an anti-terrorism unit on January 24 in the countryside near Raqqa. He was trying to escape to Turkey in coordination with his friends and contacts on the Turkish side.’

Kotey and Elsheikh look set to be extradited to the U.S – a move that British officials are not likely to oppose, according to the Daily Telegraph.

The New York Times, which broke the news of the capture, reported that Kotey and Elsheikh have had their British citizenship revoked – but this has not been confirmed by authorities in the UK.

Along with Mohammed Emwazi – the killer nicknamed Jihadi John – and Aine Davis, the pair are thought to have been part of a group named after the ’60s band because of their English accents.

The four Londoners were linked to dozens of hostage murders in Iraq and Syria while serving under the self-styled caliphate.

Nicolas Henin, a former hostage of the brutal cell, said he is satisfied to know they will now pay for what they have done and that ‘justice is what I want.’

‘Just like a guess for most of the former hostages and the relatives of those who have been killed, it is a satisfaction to know these people are not free anymore,’ he told ITV News.

‘They will pay for what they have done. For me, this is the first stage of the trial. Justice is what I want.’

It comes as the daughter of British aid worker David Haines, who was beheaded by the Beatles, said the capture of its last two members brings her ‘some comfort’ but added, ‘They shouldn’t be breathing’.

Bethany Haines, whose father David was killed in 2014 after being held captive for 18 months, said she hoped the pair’s detention could bring some closure for relatives of those killed.

She told ITV’s Good Morning Britain: ‘I got a call late last night to say that they had been captured and the first thought was relief, finally to know that the people that were involved in my dad’s murder have been caught and will sort of serve some justice.’

Asked what she would like to see happen now, she replied: ‘In my opinion, they shouldn’t be breathing but that’s not really a realistic kind of expectation.

‘I think that they should be locked up with the key thrown away and never to be released.’

She added: ‘It was always kind of the unanswered question as to where they were and could they do this sort of thing again?

‘And yes, this sort of thing might happen again but the specific people that carried it out before have now all been caught and I think it will bring a lot of closure to all the families.’

Foley told the BBC today that the arrests announced Thursday won’t bring her son back, but ‘hopefully it protects others from this kind of crime.’

She says ‘their crimes are beyond imagination. They really have not done anything good in the world, so I think they need to spend the rest of their life being held.’

Unnamed US officials told the New York Times that Kotey, 34, and Elsheikh, 29, were identified by fingerprints and other biometric means.

Kotel and Elsheikh’s fate remains unclear although the US would be keen to prosecute them as they were involved in the executions of at least three Americans.

The men could also have information about other hostages, including British journalist John Cantlie, who was abducted in 2012.

Since he was taken hostage, Mr Cantlie has appeared in several IS propaganda videos.

He said: ‘These are people who have done absolutely vile & despicable crimes & brought absolutely so much misery. It is good that they have been hunted down and caught.’

The ringleader of the ‘Beatles’, Mohammed Emwazi – known as Jihadi John – was killed in an airstrike in 2015 in Syria. A fourth man, Aine Davis, is imprisoned in Turkey on terrorism charges.

The US government said the Beatles beheaded more than 27 hostages.

According to the State Department, Kotey ‘likely engaged in the group’s executions and exceptionally cruel torture methods, including electronic shock and waterboarding.’

Kotey also acted as an ISIS recruiter and was responsible for recruiting several Brits to join the murderous organisation.

The State Department said ‘Elsheikh was said to have earned a reputation for waterboarding, mock executions and crucifixions while serving as an ISIS jailer.’

He was born in Sudan, but his family fled the country and came to Britain in the early 1990s.

Elsheikh became heavily influenced by the sermons of a West London imam known for his radical beliefs.

His father, Rashid Sidahmed Elsheikh, a translator and poet living in London, said his son had travelled to Syria to fight for jihadis at the start of 2012.

He described his son’s radicalisation as ‘lightning-fast’.

He said: ‘We tried to handle this in a mild, considerate way but before we could do anything, he just left.’

Elsheikh’s mother, Maya Elgizouli, said Elsheikh was the middle son of three raised alone by her after the family moved to Britain. 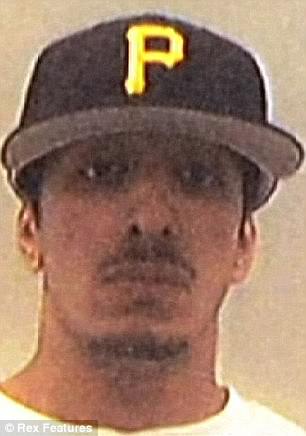 Along with Mohammed Emwazi – the killer nicknamed Jihadi John (pictured) – and Aine Davis, Kotey and Elsheikh are believed to have been part of a group named after the Beatles because of their English accents

But she said he was affected badly when his eldest brother Khalid was sentenced to ten years in prison for possessing a firearm after the killing of a gang member involved in a dispute with the family.

Elsheikh’s younger brother, Mahmoud, was killed fighting for ISIS in Iraq last year after following him to the war zone as a 17-year-old.

Salah al-Bander, a former Cambridge Liberal Democrat councillor who raised the alarm about Elsheikh’s journey to Syria in 2012, said he had a stall outside Shepherd’s Bush tube station from which he used to preach, adding that he was ‘completely transformed’ into a radical in a short period.

He told The Guardian: ‘El Shafee was a really very quiet, kind, reflective young person. In a very short period of time, I mean weeks, he turned to be very radicalised, with very strong views about everything.’

Kotey, also a QPR supporter, was from Paddington and raised in a Greek Orthodox family. Neighbours said he was a ‘reserved, polite boy’.

He converted to Islam after falling in love with a Muslim woman and had two daughters with her.

In January 2017, US authorities named Kotey as a member of the cell and said they had imposed sanctions on him.

Davis, a former tube driver and drug dealer from Hammersmith in west London who went to Syria in 2013, reportedly told a BBC journalist to ‘f*** off’ when asked to comment on the verdict.

According to the BBC, Davis was asked in court about his involvement with the terror cell and denied involvement.

‘I am not ISIS. I went to Syria because there was oppression in my country,’ he said.

Davis is thought to have converted to Islam shortly after being jailed in the UK in 2006 for possessing a firearm.

The son of a dinner lady and a John Lewis shopworker, he took the name Hamza and travelled the Middle East.

The fourth member, Davis, was convicted of being a member of a terrorist organisation and jailed for seven-and-a-half years at a court in Silivri, Turkey, in May 2017

He befriended Emwazi at a mosque in west London shortly before leaving for Syria.

He is believed to have travelled to Syria in late 2012, where he fought for ISIS.

He abandoned four children by two different mothers when he left Britain on a flight to Amsterdam.

In 2014 Davis’s wife, Amal El-Wahabi, then 27, became the first woman to be jailed for terrorism offences connected to Syria after she was caught paying a smuggler to take €20,000 (£17,000) in cash to Turkey for her husband.

She was jailed for two years.