The 300-strong mob of Muslim men in rural Egypt also burned down seven homes belonging to Orthodox Coptic families, over rumours of an affair between a local Christian man and a Muslim woman.

A 70-year-old Christian woman has been stripped naked, beaten and paraded through the streets by a mob of around 300 Muslim men in a village in southern Egypt.

The mob also burned down seven homes belonging to Christian families, according to an unusually outspoken statement issued by the local Orthodox Coptic church, after rumours circulated in the village that a Christian man was having a relationship with a Muslim woman.

The violence started at around 8pm on 20 May, and the local diocese said it was two hours before police responded, by which point the mob had already dispersed.

The woman who was stripped naked was reported to be the mother of the man involved in the rumoured affair. She has since met with church leaders, the Diocese of Minya and Abu Qirqas said.

The violence is representative of the tensions between the two religions in the province south of Cairo, where extra-marital affairs between Muslims and Christians are strictly taboo.

But it appears the Coptic church has finally had enough of what they say is unfair treatment from the authorities over such cases. Christians only make up around 10 per cent of Egypt’s population, the majority being Muslim.

And speaking in an uncharacteristically candid TV interview on Wednesday night, Minya’s most senior cleric Anba Makarios said the response if it had been a Muslim man having an affair with a Christian woman “would not have been anything like what happened”. 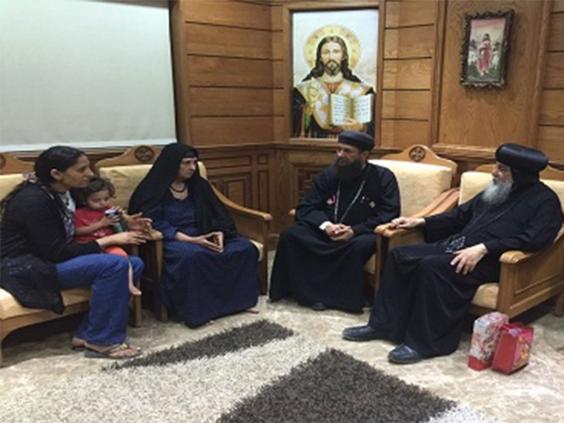 The elderly woman meets with church leaders to discuss the mob’s actions, in this image released by the Diocese of Minay and Abu Qirqas

He said police had been warned the day before of threats towards the Christian family from villagers, yet gave the mob “ample time” to do whatever they wanted.

“No one did anything and the police took no pre-emptive or security measures in anticipation of the attacks,” he said. “We are not living in a jungle or a tribal society. It’s incorrect for anyone to declare himself judge, police and ruler.”

The local governor in Minya, Tarek Nasser, has tried to play down the incident, despite multiple security officials confirming to theAssociated Press that a woman was beaten and insulted while being paraded through the village.

Mr Nasser denied the elderly woman was stripped naked, and accused the Muslim Brotherhood of “exploiting” the situation which, he said, was always going to be “sensitive” when it involved an alleged relationship between a Muslim and a Christian.

“Some irrational youths threw flammable missiles at the houses of Christians in the village and some women ran away in their nightgowns,” he said, adding that the matter was being resolved.

The incident took place in the village of Al-Karm where, according to local media, similar violence has flared up in recent years.

In his TV interview, Makarios despaired that he knew exactly how officials would handle the new case, and how little difference it would make. He said the crisis in the village would most likely be handled through a government-sponsored meeting of the two sides, in which the Christians would be forced to accept “humiliating” conditions for reconciliation.

Christians in Egypt have long complained about discrimination and victimisation when involved in disputes with Muslims.

Since taking power in 2014, President Abdel-Fattah el-Sissi has changed some laws to ease restrictions on Christians building churching and entering politics, but many grievances remain.