People attend a funeral service for victims of a Sunday cathedral bombing, at the Virgin Mary Church, in Cairo, Egypt, Monday, Dec. 12, 2016. Egyptians held prayers for 25 Christians killed the day before at a church next to the city's main Coptic cathedral in what was one of the deadliest attacks on the religious minority in recent memory. The bomb went off while worshippers were attending Sunday Mass at a chapel adjacent to St. Mark's Cathedral. The coffins of the 25 have been laid in front of the altar, with the names of each victim plastered on the side facing the congregation. (AP Photo/Nariman El-Mofty)

Christians under siege: Funeral for 24 worshippers slaughtered by Islamist suicide bomber as they prayed at Coptic chapel in Cairo

Egypt’s Coptic Christian community held a funeral service today for 24 Christians killed as they worshipped at a chapel next to the faith’s main cathedral in Cairo – one of the deadliest attacks against them by Islamists.

It emerged today that a suicide bomber had walked into the Sunday Mass at the Virgin Mary chapel adjacent to St Mark’s Cathedral, seat of the ancient Coptic Christian church.

Original reports had said a bomb had been lobbed over the wall, but Egypt’s President Abdel Fattah al-Sisi said today a suicide bomber had been to blame.

Speaking at a state funeral for the victims, Sisi identified the suicide bomber as 22-year-old Shafik Mahmoud Mohamed Mostafa.

He also said three men and a woman had been arrested in connection with the attack. 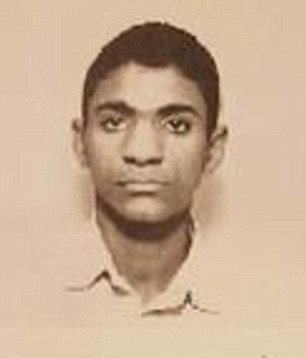 It emerged today the worshippers died after Shafik Mahmoud Mohamed Mostafa, 22, (pictured), blew himself up during a Sunday Mass

The coffins of the victims were laid in front of the altar today as the spiritual leader of Egypt’s nine million Coptic Christians, Pope Tawadros II, led the service.

No group has claimed responsibility but Julie Lenarz, executive director of the Human Security Centre, said Coptic Christians had been the subject to a ‘witch-hunt’ since the Muslim Brotherhood President Mohamed Morsi was overthrown by the army. 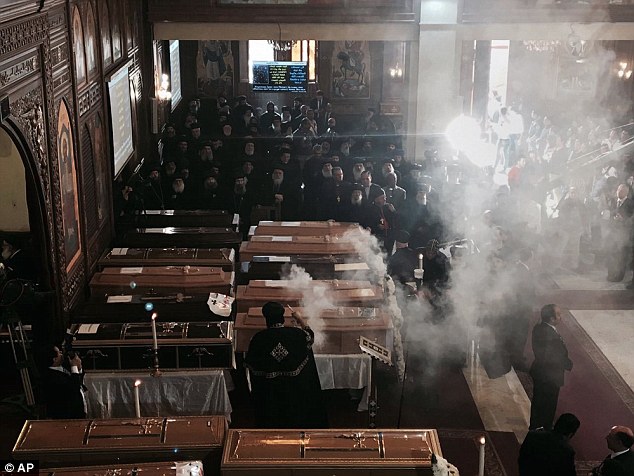 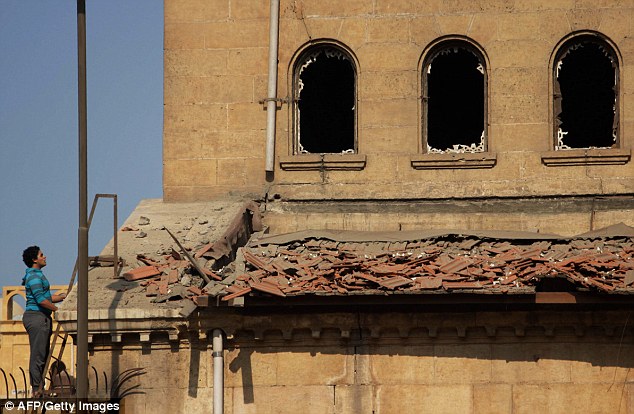 A man inspects the damage caused by a suicide bomber. The blast killed 24 worshippers during Sunday Mass

She told Mail Online: ‘Both during and after Morsi’s tenure, Coptic Christians have been the subject of a large-scale campaign of violence and terror.

‘After the Coptic leadership threw their support behind the military government, Muslim Brotherhood leaders incited their followers to target Christian infrastructure in revenge attacks.

‘Over 50 churches were completely destroyed and an intense and escalating witchhunt against the religious minority has been taken place ever since.

‘Yesterday’s atrocity was a poignant reminder of the chaos and bloodshed the ideology of Islamism, represented by the Muslim Brotherhood, brings to Egypt and beyond.’

At one point Pope Tawadros leaned on his staff and quietly prayed in front of the coffins.

He had cut short a visit to Greece and flew home last night after the bombing.

Only victims’ relatives were allowed to attend the service at the Virgin Mary and St Athanasius church in the eastern Cairo suburb of Nasr City.

Some of them screamed out in grief, while the rest quietly sobbed or sat somberly during the service.

Scores of black-clad monks, bishops and priests of the Orthodox Church attended today’s service, which was carried live by state television and private TV networks.

A state funeral will take place later Monday at a parade ground in Nasr City, with President Abdel-Fattah el-Sissi in attendance.

Previously, the deadliest attack against Egypt’s Christians was a New Year’s Day bombing in 2011 in the city of Alexandria, for centuries the seat of the Orthodox Coptic church, when 21 were killed.

Egypt has seen a wave of attacks by Islamic militants since 2013, when the military overthrew President Mohammed Morsi, of the Muslim Brotherhood. 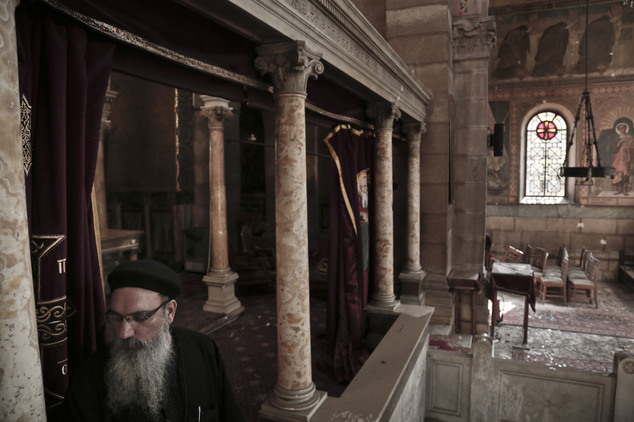 A Coptic clergyman examines the damages at the scene inside the St. Mark Cathedral in central Cairo, following yesterday’s bombing

Many of his supporters blamed Christians for supporting the army’s decision to oust him, and scores of churches and other Christian-owned properties in southern Egypt have been ransacked.

Since 2013, authorities have waged a sweeping crackdown, outlawing the Muslim Brotherhood, jailing thousands of mostly Islamist dissidents and killing hundreds in street clashes.

Egypt’s Christians have long complained of discrimination, saying they are denied top jobs in many fields, including academia and the security forces.

The church and many Christians have rallied behind Sisi, although there have been growing voices of dissent in the community.

They say little has changed under his rule, with authorities failing to halt attacks on their churches and property.