Home » EuropiStan » Denmark Muslim’s Refugees : How Many Are Coming, And From Where?

Denmark Muslim’s Refugees : How Many Are Coming, And From Where?

During the first seven months of 2017, only 1,918 people have applied for asylum in Denmark. This is the lowest number in 6 years, and a steep fall compared to the previous years. Also, Denmark has not accepted the 500 resettlement refugees from the UNHCR that we normally receive every year. Before summer there were, however, still 8,000 people accommodated in the Refugees camps, 3,000 pending asylum cases and much more family reunification cases.

Some of the people still waiting were part of the large influx in the autumn of 2015. It is surprising that the numbers have not risen after Sweden stopped the ID control at Copenhagen airport in the first week of May. If you avoid the random control on the border from Germany, your are free to pass through Denmark again and seek asylum in Sweden. It seems that this information has not yet reached the newcomers in Europe.

The record was October 2015 when 3,694 new applications were filed in one month.

The rise that Denmark experienced 2014-2016 was actually much higher in other parts of Europe, and it must be seen in the light of the highest number of refugees in the world ever. In 2015 more than 1 mio refugees came to Europe, which is twice as much as the year before. There are still many coming, especially to Italy and Germany.

In total, 80,000 people got a residence permit in Denmark in 2016, and only one out of nine was a refugee. The others got permits because of work, studies or family reunification.

Who is seeking asylum in Denmark?

The balance in nationalities applying for asylum in Denmark has changed quite a lot from 2015 to 2017. Since 2013, Syrians have made up the largest part, but over the summer of 2016 Afghans outnumbered them. In 2014, Eritrean ws suddenly No 2 on the list, dropping to No 8 in 2016. In the fall of 2015 we saw a sudden and short rise in the number of Iranians.

In July 2017, the top 5 nationalities were: Syria, Iran, Eritrea, Morocco, Afghanistan, All are Muslim from dominated Islam Countries.

The percentage who is granted asylum has decreased from 85% in 2015 to 72% in 2016, and is down to 33% in 2017. This is due to the nationalities of the applicants, where the tendency is fewer from Syria and Eritrea, who will all get asylum, to more from Afghanistan, Morocco and other countries where the majority will get a rejection. 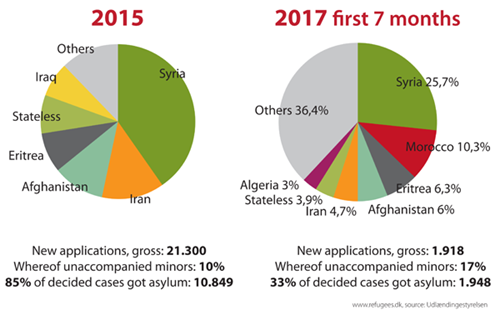 One of the reasons why relatively more are coming from Africa and fewer from the Middle East is the fact that the route through Turkey has been almost closed down, and now most people are coming through Libya. However, some of the Syrians are also coming via Libya, crossing the sea to Italy. This is a much more dangerous route, where many are dying in the Saharan desert and drowning in the Mediterranean Sea.