NEW Calais Jungle is springing up on the side of picturesque chalky cliffs in France – but far from being men who have escape war and persecution – the inhabitants of the small tent town are from Albania.

Hidden away among the cliff edges are the beginnings of what could soon become, according to residents of Dieppe, the next sprawling migrant camp.Around 200km from Calais sits Dieppe – one of the busiest fishing ports in France.The Communist mayor of the coastal area Sebastien Jumel revealed he is doing his best to look after the migrants – but said they are planning to come to England – rather than stay in France. 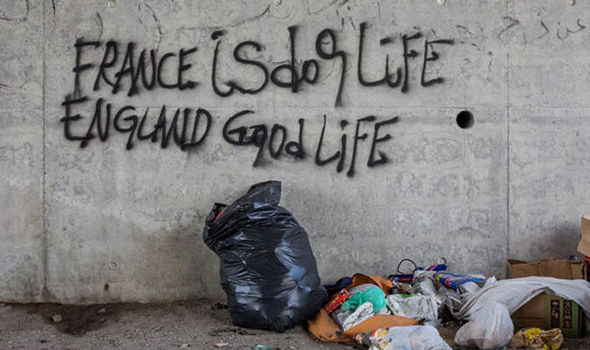 He told The Europea newspapern: “Yes, there are a number of refugees who have come to Dieppe and who want to reach the UK.“What we are concerned about is the majority of men who have made their way to Dieppe from Albania with the UK as their final destination“We know there are Albanian gangs of people traffickers who are paid to deliver Albanian men from Albania to the Normandy coast, including Dieppe.“Many have the intention of getting to England from this area – whether it be through cars and lorries from our port or using Dieppe as a launch pad to then move them to other areas along the coast where they can then attempt to cross La Manche.”

The mayor warned this is not a problem which has a swift resolution.He said the focus in France is to target the gangs smuggling people into the UK and into France from Albania.

Many arrests have been made. However, the mayor said those arrested have been ‘foot soldiers’ driving flash cars.

The four hour Channel crossing is a tough one – with stormy conditions often making it perilous for small boats.

In June, Albanians told Express.co.uk they can get away with living illegally in the UK as long as they stay away from trouble.

Many admitted to having family members in the country illegally, but said it is not likely they will be caught if they do not get arrested.

Fiqiri Mici, 54, was expelled from Italy for working illegally to take money to his family in Albania.

He said expulsions from Europe can be common, however, he claims they are rare from Britain, unless the person was caught for committing crime by police.