University students, including those at the Oxford Union, invited Islamic speakers with a history of extreme comments to 112 events in 2016

Radical Islamic speakers have been invited to more than 100 events hosted by student societies over the past year despite a government crackdown. new report reveals the speakers were invited to speak to undergraduates at elite institutions including Oxford, Warwick and Manchester.

In total, guests with a record of preaching extreme views were given access to students on 112 occasions – and in most cases no effort was made to provide any balance to their statements.

In one case, a preacher who had previously advocated wife-beating and claimed that ‘Islam is not compatible with democracy’ was allowed to speak to students of the School of Oriental and African Studies in London.

In another, Oxford University students heard a speech by the director of Cage, the group which once described IS killer Jihadi John as a ‘beautiful young man’.

The data, gathered by the Henry Jackson Society think tank, follows a string of terror attacks this year in Manchester, London Bridge and Parsons Green.

Universities are required to help prevent extremism and report any concerns they have to counter-terrorism officials under the government’s Prevent Duty.

Yesterday, critics said the report showed not enough is being done by university leaders to stop vulnerable students being brainwashed by radicals.

Robert Halfon, the Conservative chairman of the education select committee, said: ‘It is unacceptable that the universities are not doing enough to crack down on extremism.

‘They should do everything possible not to be unwitting accessories to encouraging terrorism.

The hate-filled views of the guests 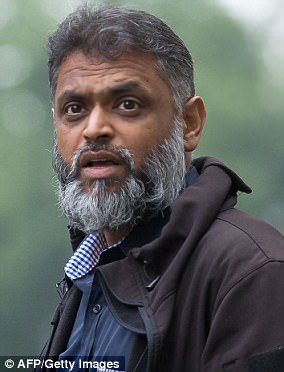 2 February 2017 – University of Oxford – Asim Khan gave a talk during an event hosted by Oxford’s Islamic Society as part of ‘Experience Islam Week’. He is involved in the online platform Islam21c, which has published pieces condemning the integration of Western Muslims, describing it as a ‘secular disease’. Mr Khan has referred to homosexuality as ‘evil’, ‘wretched’, ‘shameful’, a ‘sin’ and a ‘criminal act’.

3 July 2017 – University of Oxford – Moazzam Begg gave a speech at the Oxford Union, a debating society which is legally separate from the university but is made up of almost exclusively Oxford students. Mr Begg is the director of Cage, the controversial group which described Isis killer Jihadi John as a ‘beautiful young man’.

22 November 2016 – University of Warwick – Hamza Tzortzis spoke at an event hosted by the Warwick Islamic Society as part of ‘Discover Islam Week 2016’. He is an instructor for the Islamic Education and Research Academy (iERA). He has previously stated that apostates who ‘fight against the community … should be killed’, and that ‘we as Muslims reject the idea of freedom of speech, and even the idea of freedom’. He later tried to distance himself from these comments. 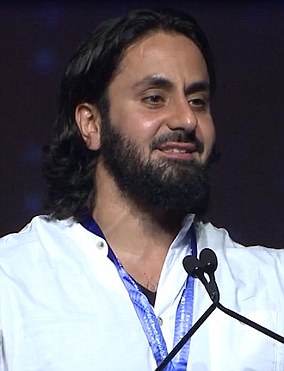 Hamza Tzortzis, who once stated that Muslims ‘reject the idea of freedom’, was invited to speak at Warwick University

4 November 2016 – SOAS – Abdur Raheem Green spoke at an event hosted by the Islamic Society at SOAS. He is the chairman of iERA, and was reported in February 2009 to have claimed that ‘Islam is not compatible with democracy’, and that a husband may use ‘physical force … a very light beating’ against his wife.

11 November 2016 – University of Manchester – Dr Siema Iqbal was billed to speak at an event organised by the Islamic Society and Students’ Union at Manchester. In 2014, she made a series of controversial statements on Twitter including ‘Truce in Gaza? Don’t you believe it! the Jews are shipping around for cheaper bombs’, another which said ‘When a people who survived a genocide use it as an excuse to commit genocide’ against a backdrop of a blood-stained Star of David, and also made a post calling for the relocation of Israel to the United States as a solution to the Israel-Palestine conflict.

27 October 2016 – King’s College London – An off-campus event hosted by the King’s College London Islamic Society advertised promotional material which initially pledged a ‘mystery speaker’ before revealing Zahir Mahmood as a guest. He has previously claimed the West has ‘been vilifying, demonising the Muslims, Islam, and especially the Prophet’, and that Hamas ‘are not terrorists, they’re freedom fighters’.

‘If the Prevent guidelines are not working, they need to be toughened up.

‘Given what has gone on in our country over the past few months, they have a real responsibility to stop extremism on campus.’

Anthony Glees, director of the Centre for Security and Intelligence Studies at the University of Buckingham, added: ‘Universities should not be soap boxes for extremists. By law, academic freedom applies to professors and lecturers so that they can disseminate knowledge.

‘People pay to go to universities to learn from their professors, not to listen to radical speakers.

‘I hope that this report is taken seriously.

‘Universities have a duty of care to students and they need to exercise their authority. 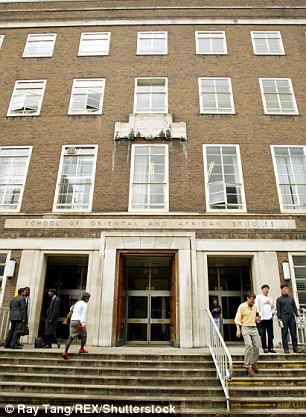 The School of Oriental and African Studies, in London, hosted the most talks of any university, with 14

‘The events in Manchester and London mean universities cannot pretend that terror is not a threat. It is unacceptable that some appear to be failing to crack down on extremism.

‘Clearly, the Prevent guidelines are not working.’

In every case, the universities themselves were not involved in the invitations as the events were organised by individual student groups – mostly the unions or the Islamic societies.

The Higher Education and Funding Council for England (HEFCE) has found that the majority of universities are satisfying the statutory requirements of the Prevent duty.

It said in all but one of the cases uncovered, the speakers were allowed to disseminate their views without being challenged.

They said the events featuring extreme speakers and organisations were routinely advertised to students through social media pages.

At a university level, the School of Oriental and African Studies (SOAS) played host to the most events – 14.

Many of the events were attended by the same speakers, with the six most prolific speakers accounting for 52.7 per cent of the events.

‘It is now necessary to take a step forwards. Extreme speakers and organisations have been regularly holding events on campuses, and advertising them to students through social media pages. In most instances, these events have been unbalanced in nature, meaning that speakers are disseminating their views without being challenged.

‘Only a joint effort by university staff, students, event organisers and practitioners from across civil society will ensure that extremism is challenged robustly.’

Nick Hillman, of the Higher Education Policy Institute, added: ‘These are intensely difficult issues, especially for autonomous universities at the forefront of free debate and new knowledge.

‘However, the law and regulations are clear and students and universities need to ensure they are applied in full.

‘Our recent survey of free speech issues among students showed they are confused about these issues and also remarkable impressionable.

‘So universities could usefully discuss what is reasonable and what is harder to defend with their students, especially their freshers arriving on campus now.’

A Department for Education spokesperson said: ‘There is no place at universities for those who spread hate or seek to justify terrorism.

‘While these institutions have a responsibility to protect free speech, they are legally required to protect students by risk-assessing speakers and putting in place formal support systems, as set out in the Prevent duty.

Manchester, which was targeted by terrorist bomber Salman Abedi this summer, was another to invite extremist speakers last year

‘Many universities are going above and beyond this but any report that the duty is not being followed will be investigated by the universities regulator HEFCE.

‘However, this is a job for us all and we are continuing to work in partnership with communities of all faith backgrounds to challenge those who spread hatred and intolerance.’

SOAS Registrar Paula Sanderson said: ‘We take our duty of care to our community and our legal obligations very seriously.

‘SOAS hosts hundreds of speakers every year and has a robust policy and code of practice for events held on campus. We also conduct due diligence on all such activities. Indeed our policy was given a high rating last year by the Henry Jackson Society.

‘The events referred to in the Henry Jackson report were held under the auspices of student societies at SOAS. They were legal. No concerns were raised with us by local police or Prevent officers.

‘At SOAS we believe that it is only through freedom of debate and robust discussion that universities can work to address some of the most complex and challenging issues facing the world today.

‘We recognise that these freedoms and rights are not absolute – they are freedoms to be exercised within the law.’

Last year, a Daily Mail investigation revealed how CAGE was targeting students across the country in a sinister campaign.

They were involved in 13 student events over the space of just a few months and were given unchallenged platforms to convey their extreme views.

During the events, they told young Muslims to sabotage the Government’s anti-extremism policy Prevent, claiming it is an attempt by the State to spy on them.

In a series of inflammatory lectures, he told impressionable young Muslims that they are being treated in a similar way to Jews under the Nazis.

Lord Carlile, a former reviewer of UK terror legislation, later warned that students had been at greater risk of being radicalised by Islamic State as a result of CAGE’s campus campaign.

The Mail also exposed how Egyptian cleric Fadel Soliman spoke at five student events in 2015, using them to refer Muslim students to an online lecture series in which he speaks in favour of hitting women and outlines the Islamic case for sex slavery and polygamy.

‘And then to have the practice of framing a response and using reason to counter these objectionable ideas and to try to change the other person’s mind and to be open to having their own minds changed.’

Richardson said that provided organisations such as CAGE ‘can be countered, I think that we should let them be heard’.