Bashar al-Assad’s forces used helicopters to drop devices that released chlorine gas on civilians in Idlib province last year, according to a confidential report sent to the UN Security Council.

Boris Johnson said the probe by the UN and the Organisation for the Prohibition of Chemical Weapons (OPCW) demonstrated the “cruel barbarity” of President Assad’s regime and called for violations of international law to be punished.

Investigators said there was “sufficient evidence” to conclude that government forces were responsible an attacks on the rebel-held village of Qmenas on 16 March 2015.

The Joint Investigation Mechanism (JIM) report said a device dropped from a high altitude “hit the ground and released the toxic substance that affected the population”.

Dr Muhammad Ghaleb al-Tanari, from a field hospital in nearby Sarmin, said at least 120 people were affected by two rounds of barrel bombing using chlorine gas.

In an account given to the Violations Documentation Centre in Syria, he said casualties started arriving 10 minutes after a helicopter passed overhead. Dr al-Tanari reported symptoms including vomiting, weakness, coughing, shortness of breath and eye and skin irritation consistent with chlorine gas exposure.

“The second attack killed six people from one family, when a barrel fell directly on their house,” he added. “They had gone down to the basement to seek shelter from the impact of the explosion, as they usually did, which led to their immediate suffocation as the gas, being heavier than air, slipped down to their shelter.” 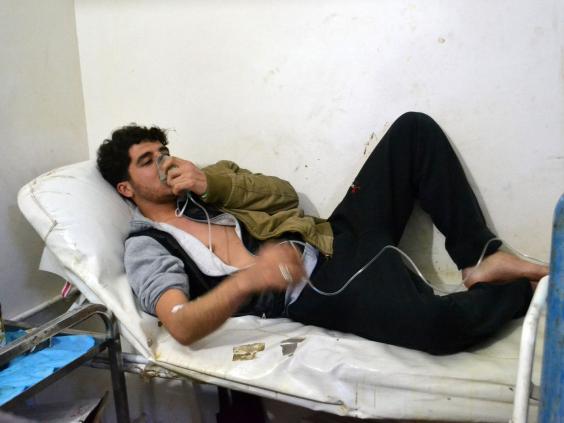 Activists allied to local rebel groups published images claiming to show remnants of the bombs, including canisters and hoses.

JIM investigators were unable to determine responsibility for two other chemical attacks.

The report said remnants of the device allegedly used in Kfar Zita, Hama governorate, on 18 April 2014,had been removed and could not be linked with certainty to the location. They said witnesses corroborated that a canister with traces of chlorine was found in Binnish, Idlib governorate, on 24 March 2015 but the exact time and location could not be established.

A previous report released by the JIM in August concluded the Assad regime had used chlorine gas in two other attacks – one in Talmenes on 21 April 2014 and another in Sarmin on 16 March 2015.

The use of chlorine as a weapon is prohibited under the 1997 Chemical Weapons Convention, which Syria joined in 2013 while pledging to destroy its stockpiles.

Britain and the US were considering an invasion to oust President Assad during the period, following an alleged sarin attack that killed hundreds in the Damascus suburb of Ghouta the previous month.

Numerous chemical attacks using chlorine, sarin and mustard gas have been reported in the five-year conflict, most commonly blamed on the Syrian army but also attributed to Isis and other rebel groups. Investigators also found Isis had deployed sulphur mustard gas in Marea, near the Turkish border, on 21 August last year during battles against opposition groups.

Mr Johnson called the confirmed use of chemical weapons by both the Syrian regime and Isis “horrific”.

“The attacks in Qmenas, Sarmin and Talamenes demonstrate the cruel barbarity of the Assad regime in this conflict,” the Foreign Secretary said. “The use of chemical weapons by Daesh (Isis) in Marea shows their complete disregard for human rights, and international norms and values.”

Mr Johnson said the report showed that Mr Assad’s government had failed to cooperate with international investigators and said the UK would work to end the “indiscriminate bombing campaign” and restart peace talks.

“The use of chemical weapons is horrific, and a breach of international law and UN Security Council resolutions,” he added. “It is crucial to hold those responsible to account.”

The JIM was established a year ago to identify those responsible for chemical attacks in Syria, so far investigating nine cases in seven towns. 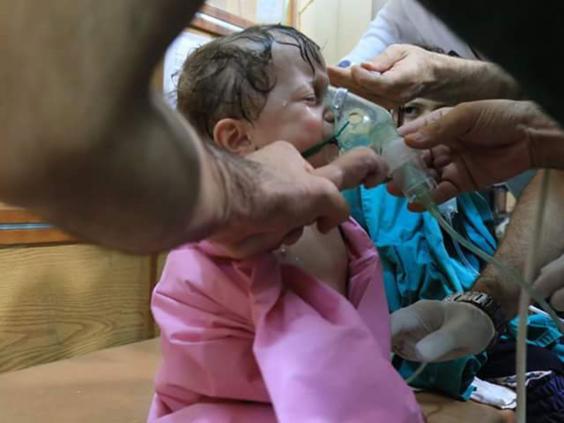 Its latest report is expected to be discussed by the UN Security Council on Thursday.

The US, Britain and France want to impose sanctions on the Assad regime for using chemical weapons but the Syrian government has denied all allegations and Russia, its closest ally, has dismissed previous evidence as inconclusive.

Mosow is expected to oppose any new sanctions proposed at the Security Council, with Vladimir Putin’s spokesperson calling for the whole country to be “liberated” from rebel groups on Saturday.

In a television interview, Dmitry Peskov said: “There are just two options: Assad sitting in Damascus or the Nusra sitting in Damascus.”  He was referring to Jabhat al-Nusra, an Islamist rebel group that renamed itself Jabhat Fateh al-Sham after claiming to split from al-Qaeda.

The statement came as a pause in air strikes on rebel-held areas of Aleppo entered its third day, with the UN calling for the evacuation of wounded civilians and fighters from besieged areas. But rebels have rejected the offer to evacuate and no movement has been seen along the corridors created by the Syrian government.