Far-right party leader Norbert Hofer said Turkey joining the bloc could be the game changer that forces Austrians to call for an EU referendum in a bid to break away.

He said: “I believe that people are able to learn, that political structures are able to develop, and that Austria will contribute to making Europe better.

“There is one exception, however, that is if the EU decides to let Turkey join the Union. Austrians will have to be asked whether they want this.”

His remarks come amid fresh discussions between Turkey and EU bigwigs after Ankara demanded an acceleration on its application in return for taking back migrants seeking asylum in Europe.

The European powerhouse and Turkey have been locked in a high-stakes standoff over Ankara’s refusal to reform its strict terror laws in return for visa-free travel and £2.5billion to clamp down on the migrant crisis.But keen to jump on the Brexit result in talks earlier this week, EU minister Omer Celik argued that the bloc needs his country more than ever after Britain voted to pull out in last week’s historic referendum.Mr Hofer went on: “I hope that there will be no need for a referendum in Austria, and that the Union will develop in a positive manner.

“But I am fully certain that Austrian people will not accept Turkish membership in the bloc, as well as the situation where Austria is deprived of its powers in favour of the authorities in Brussels.”

Turkey’s journey towards EU membership has so far been a long and complicated one. Major stumbling blocks include Turkey’s refusal to recognise the Republic of Cyprus or Greece’s demands for an end to Turkish control in the island’s north.

There are also questions over whether Turkey can match EU standards on corruption, data protection, Europol, judicial co-operation and terror legislation. Mr Hofer also called for the EU to “learn lessons” after the people of Britain backed Brexit.He added: “Of course I was concerned about the future of the EU. I respect the decision the British nation made, all democratic decisions must be respected.

“However, the European Union must learn this lesson: we must be creating Europe for the people, not Europe for bureaucrats. 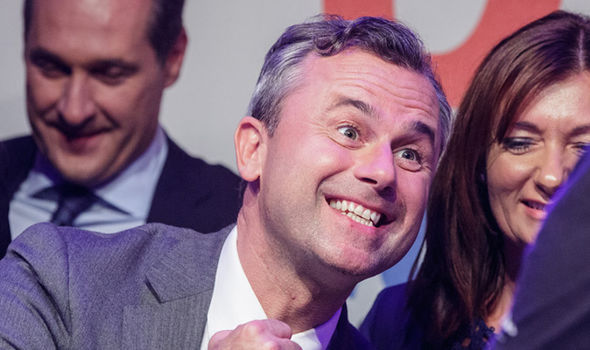 “This means that we need to come up with better agreements, we must divide the powers between the EU, on the one hand, and its member states, on the other, and get the citizens involved in these projects.”It comes after it emerged Mr Hofer will now have another chance to become the first far-right head of state in an EU country after the Freedom Party won its appeal.

Mr Hofer received 51.9 per cent of the initial result in the country’s presidential elections, not counting absentee votes – a total that was described as a “political earthquake”.

However, he was narrowly defeated after counting absentee votes for a the final total, former leader of Greens, Alexander Van der Bellen, edged in front with a 50.3 per cent victory.