Austria is a short step frombecoming the first European Union country to elect a far-righthead of state, the result of mounting angst about livingstandards and Europe’s migrant crisis triggering more than100,000 asylum requests.

The anti-Islam and eurosceptic Freedom Party (FPO) grabbedmore than a third of the vote in the first round of presidentialelections on April 24.

The second round is on Sunday, pitting FPO candidate NorbertHofer against independent Alexander van der Bellen, a formerGreens party leader. 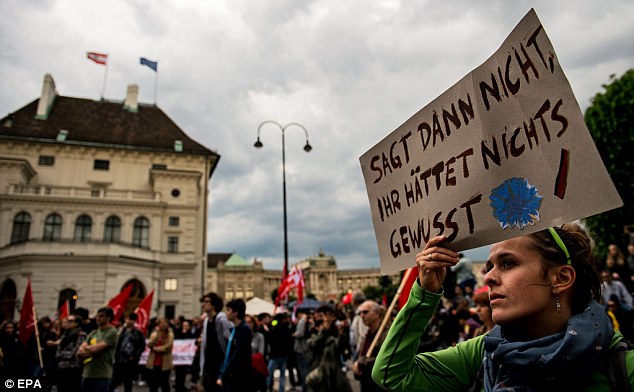 A protester holds a sign reading ‘In the end, don’t say you didn’t know anything’ during a demonstration against Austrian Freedom Party (FPOe) presidential candidate Norbert Hofer

Austria’s president traditionally plays a largely ceremonialrole but swears in the chancellor, can dismiss the cabinet andis commander in chief of the military

A Gallup poll for the Oesterreich newspaper last weekendfound Hofer ahead by a 53-47 margin based on 600 peoplesurveyed. But it was a dead heat among those who said they werecertain to vote, a key factor after nearly a third of eligiblevoters failed to cast ballots in the first round.

The two have exchanged bitter attacks in the run-up to thedecisive vote that comes amid right-wing gains across Europe.

Hofer, 45, has called van der Bellen a ‘fascist Greendictator’ for saying as president he would block any governmentled by anti-Europe FPO boss Heinz-Christian Strache. 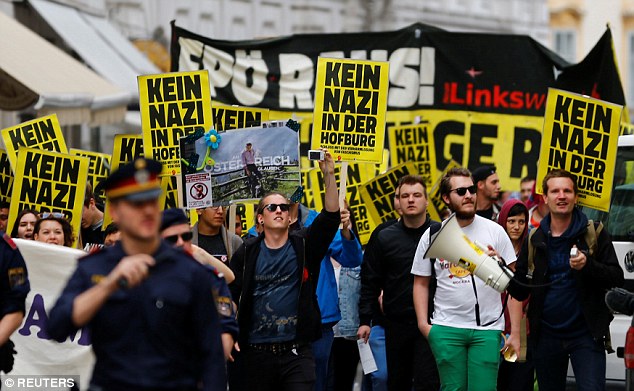 Chain-smoking economics professor van der Bellen, 72, saysHofer is just itching for the chance to dismiss the cabinet andusher in a right-wing government.

Hofer, a former aviation engineer, is a soft-spoken butdetermined personality who worked his way out of the wheelchair

to which he had to use after a paragliding accident in 2003.

The gun fan says his most important political project is tosecure borders. Having voted in 1994 against joining the EU, hehews to Strache’s view of Europe as a collection of fatherlands.

He has said he would not swear in a female minister wearinga headscarf, which he sees as a symbol for the oppression ofwomen. ‘I tell it like it is,’ he is fond of saying.

Its warnings about the security threat it says Muslimmigrants pose have hit the headlines of late, but the FPO hasbeen on the rise for years, not only due to immigration.

Fears about employment and security, as well as a sense thatsociety is moving in the wrong direction, have helped the partygain ground in elections since 2002. It now regularly topsopinion polls with more than 30 percent support. 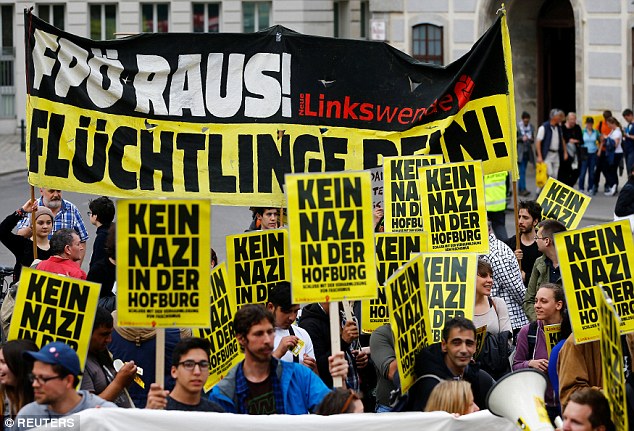 Once led by firebrand populist Joerg Haider, the FPOpresents itself as the underdog taking on the two big parties,although it is in coalitions in two of Austria’s nine provinces.

The conservative People’s Party went into a nationalcoalition with Haider’s Freedom Party in 2000, prompting somecountries to shun Austria. But now there is even a debate withinthe SPO about whether to join forces with the FPO. (Additonal reporting by Francois Murphy, Kirsti Knolle,Alexandra Schwarz-Goerlich and Shadia Nasralla Editing by JeremyGaunt)